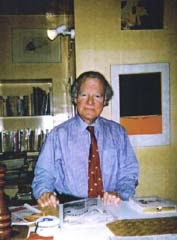 Composer GRIFFITH ROSE was born in 1936 in Los Angeles. His father, Raymond Stanley Rose worked for the New York Stock Exchange, and young Griffith was brought back to New York City before he was a month old. Rose attended boarding schools from the age of about six, including the South Fay School in South Borough, Boston. After the war, his family moved into the Mayfair Hotel at Park Avenue and 65th street in New York City.

His first interest in music surfaced through listening to his mother’s records at home and again when his older sister gave him a recording of Peter and the Wolf. At fourteen or fifteen, he read Thomas Mann’s Doktor Faustus, and decided at that point to become a composer.

Rose went to Yale from 1953 to 1954, where he enjoyed a class in ancient Greek poetry. He was “chucked out” as he recalls, from his other three courses —philosophy, chemistry, and German. Rose learned to read music by looking at scores and listening to recordings. He studied carefully the Bartók string quartets, the first symphony of Shostakovich, and an unfinished viola concerto of Bartók, reconstructed from Bartók’s notes by Tibor Serly.

In 1955, Rose studied with Isadore Freed at the Hartt School of Music in Hartford. Darmstadt lured Rose to Europe soon thereafter. Wolfgang Fortner had come into residence at the Staatliche Hochschule für Musik in Freiburg in 1957, and Rose joined his classes for continued study.

Other members of Fortner’s class at Freiburg included Peter Westergaard and Hans Zender. Rose recalls, “Fortner was always on the telephone, so we taught ourselves…Westergaard was brilliant”. Rose remembers the arrival of Nam June Paik, a political refugee from Korea, sent by Stockhausen to study composition with the class in Freiburg. Fortner was too conservative for him. Paik rolled marbles, created sounds, and wanted to meet John Cage and go to New York. Rose recalls one of Paik’s pieces at Freiburg involved throwing an egg against the wall. Paik asked Rose to write a letter in English to John Cage to help him make a connection.

In the summers of 1958 and ‘59, Rose studied at Fontainebleau with Mademoiselle Nadia Boulanger. Paul Sacher had recently brought Pierre Boulez to the Akademie der Musik in Basel. Rose was admitted to Boulez’s class, which he recalls was “very expensive,” and met every two weeks through the winter semesters 1961 to ’62. It was here that Rose met Claude Lefebvre and Louis Andriessen. Rose found Boulez to be extremely severe, like Boulanger, but with a different perspective. “Both had extreme severity and extreme notions of pedagogy. In Boulanger’s harmony/counterpoint seminar, one had to sing every line through out loud to show it could stand on its own. With Boulez, one had to explain every damn note. He also insisted on flexibility, but not as Schoenberg used it, or it becomes boring.”

Rose spent the summers of 1961 and ’62 studying with Stockhausen at Darmstadt. A fellow student there was Sylvano Bussotti. Other professors at Darmstadt included Mauro Kagel, John Cage and David Tudor.

Rose had met conductor Paul Mèfano through Lefebvre in the Boulez class in 1962. When Mèfano saw Rose’s score for his first viola concerto, commissioned by John Watts and the Composers Theatre in New York City, he immediately issued a commande (commission) for a second viola concerto, to be performed by his then newly-formed ensemble 2e2m, based outside of Paris in Champigny. Jack Lang was the cultural minister in France at the time, and Mèfano was encouraging and supportive. A “golden age” of creativity began for Rose with these new connections.

The top-rated ensemble 2e2m premiered many of his works, and he received four commissions from the French state, making him eligible for residency and for membership in SACEM, the performing rights society.

Rose has spent the rest of his life living as an American in Paris, and has recently deposited his oeuvre, his complete catalog of score masters, to the American Composers Alliance collection at the University of Maryland, where they are now available for performers and researchers in perpetuity.

Rose’s musical compositions are encoded with significances that are inaccessible to those who do not possess the key. All of his works are based on a certain fetishism—of numbers, names, lovers, friends, objects, games, works of art, quotations, and other systems of meaning.

Works of art served to inspire both Ziggurat (a painting by Riccardo Licata) and ,même (the Grand Verre of Marcel Duchamp). Paintings, like poetry have been frequent points of departure for the composer.

“This way,” says Rose, “I already have a structure. In the colors and the forms, the rhythms of the poetry, I find a certain part of the music completely sketched out. Licata and Duchamp are perhaps the only ‘painters’ I have used…but they’re not the only ones who interest me. I would like to do something on Paul Klee, or Carpaccio, my great love of the Renaissance. In actuality, what attracts me to the work of Licata and Duchamp is the geometry. When I set a scene to music, it’s not the impression that I experience while looking at the scene, but rather a detailed geometric reconstruction of the scene itself, retaining its proportions. I take the geometry, leaving aside the figurative or anecdotal elements.”

63 BARS FOR JOHN CAGE for solo flute is aptly named, and like ZIGGURAT, for two flutes, it was commissioned by Pierre-Yves Artaud. This performance is the first U.S. performance of "63 Bars", and is performed by the mesmerizing Jane Rigler, who, coincidentally, studied with Artaud in Paris. 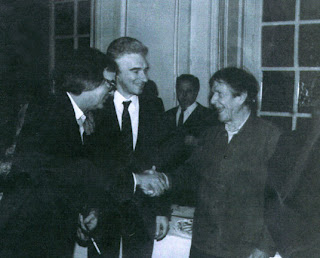 The composer, at left above, greeting John Cage at a concert in 1987, as baritone Jacques Bona looks on.

Posted by American Composers Alliance at 2/24/2009