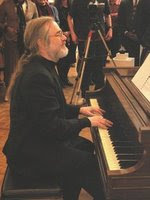 Robert Carl (b.1954) studied composition with Jonathan Kramer, George Rochberg, Ralph Shapey, and Iannis Xenakis. His music is performed throughout the US and Europe, and is published by American Composers' Alliance, Boosey&Hawkes, Roncorp, and Apoll-Edition. His grants, prizes and residencies have come from such sources as the National Endowment for the Arts, Tanglewood, Connecticut Commission on the Arts, Camargo Foundation, MacDowell Colony, Yaddo, Ucross, Millay Colony, Bogliasco Foundation, Djerassi Foundation, the Aaron Copland House, and the Rockefeller Foundation. He was awarded a 2005 Chamber Music America commission for a string quintet written for the Miami String Quartet and Robert Black. An excerpt from his opera-in-progress Harmony (with novelist Russell Banks) was presented in May 2005 in the New York City Opera’s VOX Showcase series. He is also the recipient of the 1998 Charles Ives Fellowship from the American Academy of Arts and Letters. New World Records released a CD of three large string chamber works in March 2006. In 2006-07 he has received a fellowship from the Asian Cultural Council for travel to Japan to research contemporary Japanese composers, and he has been commissioned by Oxford University Press to write a book on the premiere of Terry Riley’s In C. Other CD releases of his work are found on Neuma, Koch International, Lotus, Centaur, Vienna Modern Masters, E.R.M., and The Aerial. For fifteen years he was a co-director of the Extension Works new music ensemble in Boston; he is chair of the composition department at the Hartt School of Music, University of Hartford, and writes extensively on new music for Fanfare Magazine.

Shake the Tree (2005) began as an experiment. A series of ringing chords announce the work, all radiating up from a low A, following overtone patterns which result from that note as a fundamental. I then created a series of “time-molds”, each centered on a different pitch, moving up and down the A overtone-series, into which I poured music, spontaneous, but still exploring harmonies that treated each respective center as a fundamental. The durations of these “molds” and the patterns of movement through the centers is simultaneously rigorous and arbitrary; I admit, this is one of the more abstract pieces I’ve ever written, designed as a vehicle of exploration rather than an attempt to express any pre-conceived emotional or imaginative state. Instead, it’s very much about a world of sound to which I’m increasingly attracted, and compelled to return.

The title comes from the one motivating image of the piece. If you shake the tree, the fruit falls. The opening chords are rolled, shiver, and then begin to yield their harvest over the course of the work.

I am honored by John and Don’s openness, despite its ferocious technical difficulty, and to have two such great pianists premiering the work. The piece composed in May of 2005 at the MacDowell Colony, which is thanked for providing the ideal circumstances for its completion. (New York Premiere)

Posted by American Composers Alliance at 3/13/2009