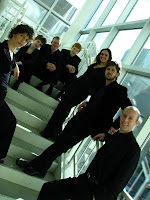 Kolot Ensemble (“voices”) was born in 2006 when a group of young and talented musicians from the Indiana University Jacobs School of Music discovered a shared passion for contemporary compositions. The ensemble emerged out of a desire to give expression to this extraordinary body of work with its wealth of styles and intricate musical and cultural influences. The mission of Kolot Ensemble is to become a voice to largely unknown new music by bringing it to the attention of wider audiences.

The music performed by Kolot Ensemble encompasses early 20th century and recent compositions. Its repertoire is diverse and challenging, with a focus on music written by Jewish and Israeli composers. Kolot Ensemble's programs are therefore uniquely positioned to combine solo and chamber pieces, creating musical experiences which journey through a multiplicity of styles and dynamic combinations.

The Ensemble is currently working on different programs of contemporary music, including several world premieres. Last April the Ensemble performed in Carnegie Hall as part of the David Krakauer Workshop: Exploring Klezmer. Other performances have included collaborations with the Melton Center for Jewish Studies at Ohio State University.

In recognition of the importance of providing a platform for up and coming young composers, Kolot Ensemble welcomes commissioned works.

Kolot Ensemble is endorsed by the Borns Jewish Studies Program and the Institute for Jewish Culture and the Arts at Indiana University.
Posted by American Composers Alliance at 3/14/2009