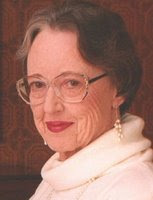 ELIZABETH BELL was born in 1928; graduated from Wellesley College (Music) in 1950, and from Juilliard (Composition) in 1953. She was music critic of the Ithaca Journal, 1971-1975; one of the founders, a former officer, and currently a director of New York Women Composers; and a member of Board of Governors of American Composers Alliance, 2000-2004. She has had commissions from the New York State Council on the Arts, the Bradshaw/Buono duo, the Inoue Chamber Ensemble, North/South Consonance, the Putnam Valley Orchestra, and Vienna Modern Masters. Awards have been: the Delius Prize (Keyboard), 1994; first prize (1986), and grand prize (1996) in the Utah Composers Competition; many Meet-the-Composer grants. There are three all-Bell CD’s: “The Music of Elizabeth Bell”, MMC 2082; “Snows of Yesteryear”, N/S R 1029; and “A Collection of Reflections”, N/S R 1042. Other recordings are on CRS, Classic Masters, VMM, and North/South Records. There have been six all-Bell concerts, including two to celebrate her 75th birthday: NYC 10/12/03, and Yerevan, Armenia, 4/28/04. Performed world-wide, she is a member of BMI, ACA, SCI, AMC, NACUSA, and other professional organizations.

FIRST STRING QUARTET
This quartet was completed in 1957 -- long enough ago! -- but the first three movements were actually written while I was still a student at Juilliard: i.e. before 1953. A true oldie. . . . The first two movements were premiered at a music school conference at the Eastman School in 1953, and I attended while on my honeymoon. The entire quartet was not given its premiere until 1986, by the Lydian Quartet in Washington, DC. (Since then it was recorded, on MMC 2028, by the Moyzes Quartet.)

The first movement is a long, slow rumination; I hear in it now intimations of the loneliness and sadness which seems to go better with old age; but there is also much peacefulness, and the joy of discovering the creative process. . . . The second movement is a loosely scherzoid romp, worked over a 5-beat ostinato. The third alternates chorale-like sections with cadenza-like solo statements, and the fourth is in nearly constant motion, with jabbing chords and long-reaching melodies.
Posted by American Composers Alliance at 3/13/2009