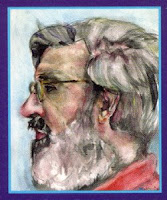 Joel Gressel (b. Cleveland, 1943) received a B.A. from Brandeis University and a Ph.D. in music composition from Princeton University. He studied composition with Martin Boykan and Milton Babbitt, and computer music with Godfrey Winham and J.K. Randall. He has received grants from the National Endowment for the Arts and the New York State CAPS program. His computer music has been recorded on the Odyssey and CRI labels. He currently lives in New York, working as a computer programmer, maintaining and extending software that models tax-exempt housing-bond cash flows. The portrait of me (above) for the festival program was drawn by my daughter, Katherine.

Blue States (2008) was composed during the fall and winter of 2008. The title alludes not only to states that voted for the Democratic nominee in the 2008 election, but also to various jazz elements and moods of sadness, largely abated by the results of the election. The opening introductory section settles on jazz chords at the end of its long phrases. In the next fugal section a jazz tune is presented in several timbres and speeds, as if a group of players were standing around waiting for their turn to get in a lick. A strong bass line proves counterpoint here and elsewhere throughout the piece. Tow introspective sections follow – the first with sustained white-noise chords punctuated by bell-like attacks, the second with vibraphone-like chords. A further set of variations moves from an almost catatonic state to a full emotional outburst, perhaps occasioned by the election results. Another faster jazzy section leads to a recapitulation that expands and alters the original three sections.
All the sounds in Blue States are produced by computer algorithms. Nothing has been prerecorded or sampled. Most sections present quasi-transpositions of the same materials at different speeds, catching up and passing one another so that a following voice becomes a leader halfway through its phrase. (World Premiere)
Posted by American Composers Alliance at 3/14/2009