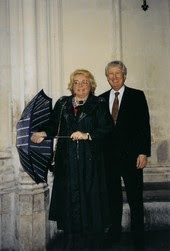 Over the years, the ACA Laurel-Leaf Award has been awarded to selected artists, ensembles, writers and organizations whose career efforts have greatly helped the dissemination and understanding of music by American composers. First awarded by ACA in 1951, it has been received by such noted artists as Martha Graham (1959), Claire Reis (1963), Henry Cowell (1965), Aaron Copland (1963) --ACA's first president, the MacDowell Colony (1973), Ralph Shapey and the Contemporary Chamber Players of the University of Chicago (1979), WNYC Radio and the American Composers Orchestra (1987), and the Gregg Smith Singers (2003).

The ACA Board of Governors voted to present this year's award to soprano Phyllis Bryn-Julson, from whom many of ACA's composers, and American composers in general, have received much encouragement and support. "I am so honored to be selected for this award. When John [Melby] [ACA Board member and composer] called me, it was not only a voice from the past, but also many wonderful memories of the many composers who have given me, my students, and so many audiences the gift of their music."

Ms. Bryn-Julson will attend the ACA Festival concert on Thursday, June 18th, at Symphony Space Thalia, where the award will be presented by ACA President, composer Hubert Howe, and Board member, composer John Melby. For tickets, please contact the online box office for Symphony Space.

Recognized as one of the most authoritative interpreters of vocal music of the 20th century, Phyllis Bryn-Julson commands a remarkable repertoire of literature spanning several centuries. Born in North Dakota, she began studying the piano at age three. She enrolled in Concordia College in Moorhead, Minnesota, studying piano, organ, voice and violin. She received an Honorary Doctorate from Concordia in 1995. After attending the Tanglewood summer music festival, she transferred to Syracuse University, studying voice with Helen Boatwright, completing her BM and MM degrees. During these college years, she made her debut with the Boston Symphony in Boston, Providence, RI and Carnegie Hall in New York. She ultimately sang with this orchestra and the New York Philharmonic dozens of times.

Ms. Bryn-Julson collaborated with Pierre Boulez and the Ensemble Intercontemporaine for much of her career, taking her to numerous festivals in Europe, Canada, Australia, New Zealand, the former Soviet Union, and Japan. She has premiered works of many 20th century composers, some of which were written for her. Included in this list are Boulez, Messiaen, Goehr, Kurtag, Holliger, Tavener, Rochberg, Del Tredici, Rorem, Carter, Babbitt, Birtwistle, Boone, Cage, Felciano, Wuorinen, Aperghis, and Penderecki.

In recent years, Ms. Bryn-Julson gave performances of Kurtag's "Kafka Fragments" in New York at the Guggenheim Museum with Violaine Melançon, violinist. She took part in the Radical Past series in Los Angeles, giving four performances of the great works of Milton Babbitt, John Cage, Cathy Berberian, and Luciano Berio. She toured with the Peabody Trio throughout the United States and Canada, and recorded works of Samuel Adler for the Milken Foundation in Barcelona. She also toured with the Montreal Symphony, performing the award winning opera "Il Prigioniero" by Dallapiccola. Performances occurred at Carnegie Hall, and in Montreal. Following this, she premiered the same work in Tokyo, Japan, where it was staged and televised. With Southwest Chamber Music Society, Ms. Bryn-Julson has performed and recorded the complete works of both Ernst Krenek and Mel Powell. Last season she premiered and recorded "An American Decomeron" by Richard Felciano, commissioned by the Koussevitsky Foundation, and written for her and the Southwest Chamber Music Society.

With over 100 recordings and CD's to her credit, Ms. Bryn-Julson's performance of "Erwartung" by Schönberg (Simon Rattle conducting) won the 1995 best opera Grammaphone Award. Her recording of the opera "Il Prigioniero' by Dallapiccola won the Prix du Monde. She has been nominated twice for Grammy awards; one for best opera recording ("Erwartung"), and best vocalist (Ligeti "Vocal Works"). She has received the Amphoion Award, The Dickenson College Arts Award, The Paul Hume Award, and the Catherine Filene Shouse Award. She was inducted into the Scandinavian-American Hall of Fame in 2000. She was the first musician to receive the United States - United Kingdom Bicentennial Exchange Arts Fellowship. She received the Distinguished Alumni Award from Syracuse University, the Peabody Conservatory Faculty Award for excellence in teaching, and the Peabody Student Council Award for outstanding contribution to the Peabody Community.

Ms. Bryn-Julson's students continue to win prizes and awards, and have made careers in some of the leading opera houses and orchestral venues. They have had contracts in opera houses in Zurich, Duesseldorf, Vienna, Paris, Lyons, London, and Sydney, and in America, the Metropolitan Opera, Houston, Minnesota, Philadelphia, Seattle, and Washington, D.C.
Posted by American Composers Alliance at 2/28/2009