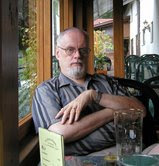 Born in 1941 in Whitehall, Wisconsin, John Melby attended the Curtis Institute of Music, the University of Pennsylvania, and Princeton University. His composition teachers include Henry Weinberg, George Crumb, Peter Westergaard, J. K. Randall, and Milton Babbitt. In 1973 he was appointed to the Composition/Theory faculty in the School of Music of the University of Illinois at Urbana-Champaign, where he was Professor of Music until his retirement in August of 1997 and where he now holds the title of Professor Emeritus.

John Melby is best known for his music written for computer-synthesized sounds, including a series of concerti for various instruments with computer; other compositions include two piano sonatas, three string quartets (the most recent of which includes computer), songs for voice and piano, pieces for larger ensembles, numerous compositions for computer alone, an opera, and two symphonies. His compositions have won numerous awards and have been widely performed both in the United States and abroad. He has been the recipient of an NEA Fellowship, a Guggenheim Fellowship, an award from the American Academy and Institute of Arts and Letters, an associateship in the University of Illinois Center for Advanced Study, and numerous other grants and awards, including First Prize in 1979, at the International Electroacoustic Music Awards (Bourges, France). His music is published by Associated Music Publishers, ACA, Shawnee Press, and Merion Music, Inc. (Theodore Presser Co.), and recorded on the CRI, Advance, New World, Centaur, and Zuma labels, and on a CD issued by the Institute International de Musique Electroacoustique in Bourges, France.

The Concerto No. 2 for Clarinet and Computer was composed in 2006 for clarinetist Esther Lamneck, who gave the first performance of the work at the University of Illinois at Urbana-Champaign in March of 2007. It is scored for B-ﬂat clarinet and a computer-synthesized accompaniment.

The electronic component of the work exists in two versions, a stereo version (the one used for this performance) and a version for eight channels, and was produced in my Macintosh-based studio using the MacCsound program for digital sound synthesis and my own C and FORTRAN data-manipulation routines.

The Concerto is in one extended movement that loosely parallels the formal structure of a typical three-movement concerto, including a cadenza. The piece is virtuosic in nature and makes use of some of the extended clarinet techniques for which Dr. Lamneck is renowned as a performer. This composition is one in a series of (so far) nineteen concerti for various instruments and computer-synthesized sounds.
Posted by American Composers Alliance at 3/14/2009