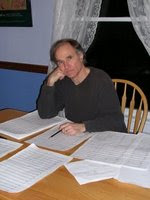 Lewis Nielson (b. 1950) studied music at the Royal Academy of Music in London, England, Clark University in Massachusetts and the University of Iowa, receiving a Ph.D. in Music Theory and Composition in 1977. His music appears through American Composers Edition and CDs of his music are available from Albany, MMC, Capstone, Centaur, and Innova Recordings. He has received numerous grants and awards for his works, including from the National Endowment for the Arts, the Delius Foundation, Meet the Composer, the Georgia Council for the Arts, the Groupe de Music Expèrimentale de Bourges in France, the Ohio Council for the Arts, and the 2008 Cleveland Arts Prize. After 21 years at the University of Georgia, he joined the composition faculty of the Oberlin Conservatory of Music in 2000 where he is currently Professor of Composition and chair of the Composition Department.

Layers of music and speech both define the structural integrity of what about you? (2007) and account for its ultimate cohesiveness. The text consists of repeating consonants and vowels, text fragments of indeterminate language, and intelligible—if occasionally fragmentary—utterances in German, Spanish, and English. Similarly disjointed organizational schemes can be heard in the music as short articulations shun connection to longer events and delay the emergence of meaning and clarity. From somewhere within this interwoven texture, the dialectical purpose of the work surfaces. The final text (taken from an unfinished poem fragment by Osip Mandelstahm in my own translation) provides a clue to the means of creating this unified form of expression: “And suddenly, out of my ineloquent stammering, sounds fill out and stretch.” (New York Premiere)
Posted by American Composers Alliance at 3/14/2009