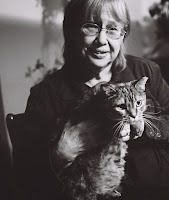 Darleen Cowles Mitchell has written over 100 compositions for various instrumental and vocal combinations, from solo flute to full orchestra and chorus. Her compositions have been performed throughout the United States and in Europe, by many performers and organizations, such as the American Chamber Symphony, Chicago; the Aurora String Quartet, San Francisco; The Contemporary Chamber Players, Chicago; and by Duo 46 at the International Guitar Festival, Hermoupolis, Greece. Her works are published by American Composers Editions in New York.

Dr. Mitchell has been the recipient of many awards, including the National League of American Pen Women Composition Competition, for her work Visions, a concerto for tuba and concert band, Meet the Composer grants, and grants from the Florida Arts Council and the Illinois Arts Council. She was awarded an Individual Artist Fellowship by the Nebraska Arts Council, the “Distinguished Artist Award” in 2005. Dr. Mitchell received a BM from De Paul University, MM from Northwestern University, and a Ph.D. from the University of Chicago, where her teachers included Ralph Shapey and Shulamit Ran. She has been on the faculties of De Paul University and the American Conservatory of Music in Chicago, and the City Colleges of Chicago, European Division, in Belgium. Dr. Mitchell is currently an Associate Professor of music theory and composition at the University of Nebraska at Kearney, where she created and oversees the annual New Music Festival.

Dr. Mitchell's most recent compositions include Metaxu (2008) for Mezzo-Soprano, Cello and Piano and Music of the Upper Worlds (2008), a concerto for violin which will be premiered by the Kearney Symphony Orchestra in October, 2009. Other recent works include Luminous Mysteries for two pianos, which was commissioned by the Nebraska Music Teachers Association, Passages, for piano trio, and Dakota, a song cycle for female voice and piano on texts by Kathleen Norris, which was performed at the ACA New Music Festival in June, 2007. O Vos Angelis, for soprano, clarinet and piano premiered in 2003 in California at the Hildegard Festival of Women in the Arts and was performed at the ACA New Music Festival in 2005. Watery Moon, for alto flute/bass flute and vibraphone was premiered in London, July 2004, at the Royal College of Music.

Mitchell’s Music of Remembrance, for chamber ensemble, was commissioned by the Third Chair Chamber Players and the Angels Theater Company, Lincoln, Nebraska, as incidental music for the play The Train. The work premiered at the Lied’s Johnny Carson Theater in Lincoln in April 2007, and was subsequently performed in Omaha and Kearney at the Merryman Performing Arts Center. The Train is a play about holocaust survivors and remembrance.

The text for Metaxu (2008) is from Simone Weil’s La Pesanteur et La Grâce (Gravity and Grace). Weil, born to a well-to-do Jewish family, embraced the social teachings of Jesus (although she never was baptized.) She preferred to live and work among the poor and died of tuberculosis, refusing the proper nutrition and medical attention that the poor could not afford. My setting uses short phrases from different sections of her book. (World Premiere)

The text translation is:

Grace fills empty spaces but it can only enter where there is a void to receive it, and it is grace itself which makes this void.

He emptied himself of his divinity, to empty ourselves of the world, to reduce ourselves to the point we occupy in space and time, that is to say, to nothing.

He who gives us our being loves in us the acceptance of not being. Our existence is made up only of his waiting for our acceptance not to exist.

This world is the closed door. It is a barrier. And at the same time it is the way through. The essence of created things is to be intermediaries leading to God.

Beauty captivates the flesh in order to obtain permission to pass right to the soul…the instantaneous and the eternal. The beautiful is the experimental proof that the incarnation is possible.

Metaxu is a Greek word for the boundary between the material and spiritual worlds. The passage through is possible by meditation as well as music. My interest in women mystics and stumbling upon Weil’s book inspired the piece, which took shape as a work for two new faculty members, Sharon Campbell and Noah Rogoff. The melodic and harmonic resources grow from a group of set classes from (0167) to (01267) and (012367). The textures, use of the sets in embedded layers, soloistic searching melodies in the cello, and especially in #4, Metaxu, the crossing of the voice and cello parts, with the voice and cello basically on top of each other, are meant to symbolize the image of metaxu and bring out the liminal qualities of the music.