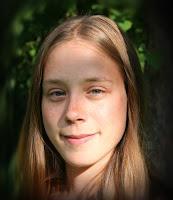 Kirsten Volness (b. 1980) grew up in a small town in southern Minnesota, a place that fostered in her a keen interest in the outdoors and the wonders of nature. The magic to be found in the natural world informs and inspires her creative work as do earth-based spiritual traditions.

She completed her DMA in Composition at the University of Michigan (from which she also holds an MM). She worked with Bright Sheng, William Bolcom, Betsy Jolas, Michael Daugherty, Karen Tanaka and studied electronic music with Evan Chambers and Erik Santos. She received a Bachelor of Arts, summa cum laude, from the University of Minnesota where she studied with Judith Lang Zaimont. Kirsten was named winner of the 2007 BMI Women's Music Commission and received a 2007 ASCAP/Seamus student commission. Her electronic work has been performed at numerous festivals including Bourges, SEAMUS, Electronic Music Midwest, and Third Practice. Her acoustic work has been performed by the Colorado Quartet, Ann Arbor Symphony Orchestra, featured at Midwest Composers' Symposia, the Montreal and Edinburgh Fringe Festivals, and presented at various concerts throughout North America, Europe, and Australia.

Hverfa, (2006) pronounced ker'fa, means to "disappear" or "vanish" in Icelandic. The word also has connotations of revolution, spiraling and change. I had this image of a long winter's journey in my mind as well as the theme so commonly found in Scandinavian short stories that the forest and sea are places of (super)natural danger. If one chooses to go venturing, one may or may not return (and who knows what mischief one may meet along the way.) (New York premiere)
Posted by American Composers Alliance at 3/14/2009