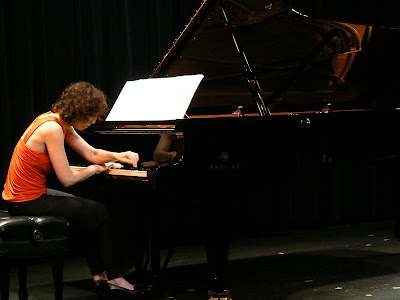 Born in 1979, pianist and Kolot Ensemble director Yael Manor earned both her Bachelor's and Master's degrees with honors from the Buchmann-Mehta School of Music at Tel‐Aviv University. A winner of the America‐Israel Cultural Foundation Scholarship for the years 2004‐2006, Manor also received several Excellence Awards from the Buchmann‐Mehta School of Music. While studying with the late pianist Alexander Volkov, Manor appeared in Israel and in the USA as a solo recitalist and as a chamber musician in works ranging from early Baroque to 20th century classics. From a young age she took part in many master classes in Israel and abroad; among them are the Suzuki International Piano Master Classes for Young Artists in Canada, Mannes Keyboard Festival in New‐York, Master Classes at the Buchmann‐Mehta School of Music and the Tel‐Hai International Master Classes in Israel, where she received a special award for her performances. Her teachers were Naum Shtarkman, Ruth Laredo, Ronan O'Hora, Donald Berman, Bruce Brubaker, Daniel Hoxter, and Vladimir Shakin, among others. Along with her studies and work in the traditional repertoire, Manor developed a keen interest in contemporary music.

In the last several years she has nurtured and developed her expertise through concerts in Israel, in which she performed works from both 20th century classics and living contemporary composers. These include public performances in the International Hindemith Festival, the Jerusalem Music Center Mishkenot Sha’ananim ‐where she also recorded for “Kol Hamusica” Israeli Radio Station, and several other concerts including the monumental work 36 Variations on “The People United Will Never be Defeated” by Frederic Rzewski, which she also performed as part of her Graduation Master Recitals. Manor has performed many premiers of piano pieces by leading young Israeli composers – including Avner Dorman, Gilad Hochman, Erel Paz and others. In 2006, Manor took part in the New Music Ensemble at Indiana University, during which the group performed in the Kimmel Center in Philadelphia, the Miller Theatre in New York City, and the Dekelboum Concert Hall in Maryland. In this same year Manor founded Kolot Ensemble which performs Contemporary music and focuses on music by Israeli and Jewish composers. The ensemble, which she directs, had its Carnegie Hall debut as well as several concerts in Columbus, OH, and Bloomington, IN, and was featured in the ACA Summer Music Festival at Symphony Space Thalia, in New York City, in June 2009.

Most recently, she returned to Carnegie Hall for a commissioning project led by composer Osvaldo Golijov and soprano Dawn Upshaw, featuring eight contemporary composers under the age of 35. These commissions were premiered at Carnegie Hall in May 2009. In addition, she has led Kolot as one of the featured ensembles at the Mannes College's Institute and Festival for Contemporary Performance - Summer 2009 series. Currently, Manor is completing doctoral work in Piano Performance at Indiana University’s Jacobs School of Music, where she studies with Arnaldo Cohen.
Posted by American Composers Alliance at 2/21/2009