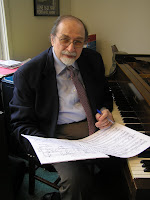 Elliott Schwartz was born 1936 in New York City and studied composition with Otto Luening and Jack Beeson at Columbia University. He has recently retired from the faculty at Bowdoin College, where he served for 43 years, twelve of them as department chair. His many extended residencies and/or visiting professorships include Ohio State University, the University of California (San Diego and Santa Barbara), Harvard, Oxford, and Cambridge. Schwartz’s compositions have been performed by such groups as the Minnesota Orchestra, Cincinnati Symphony, Indianapolis Symphony, St. Paul Chamber Orchestra, Chicago Chamber Orchestra, and the Youth Orchestra of the Netherlands and featured at numerous international music centers and festivals including Tanglewood, the Library of Congress, Monday Evening Concerts (Los Angeles), DeIjsbreker (Amsterdam), Music of the Americas (London), and the European Youth Orchestra Festival (Copenhagen). Leading orchestras and chamber ensembles have recorded his music for New World, CRI, Albany, Innova, Capstone and other labels. Honors and awards for his compositions include the Gaudeamus Foundation (Netherlands), the Rockefeller Foundation (two Bellagio residencies), and the National Endowment for the Arts. Over the course of his career he has served as president of The College Music Society, president of the Society of Composers, Inc, vice-president of the American Music Center, and board member of the American Composers Alliance.

Schwartz has also written or edited a number of books on musical subjects. These include Music: Ways of Listening, Electronic Music: A Listener’s Guide, Music since 1945 (co-author with Daniel Godfrey) and the anthology Contemporary Composers on Contemporary Music (co-editor with Barney Childs).

A CD recording of four recent works has just been released by Innova Records, and a disk containing Schwartz's six chamber concertos (played by the Boston Modern Orchestra Project, Gil Rose conducting) will appear on the BMOP Sound label later this summer.

The Seven Seasons was composed in 2007 for one of my students, Katie Cushing, who is an excellent pianist with experience in playing new music and great interest in extended piano techniques. I had originally thought of a work depicting the four seasons, but then decided that it would be more interesting to add three more "seasons" -- Holiday, Monsoon and Wildfire --to the traditional foursome. Katie played /The Seven Seasons /at a Bowdoin College student recital in May 2008; the present performance is the work's New York premiere.