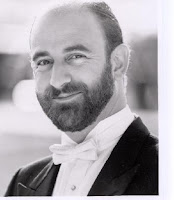 Gary M. Schneider, composer, is more widely known locally as an award winning conductor of orchestras throughout the United States and Europe. In addition to his activities on the podium, he has composed a wide variety of concert works as well as music for theater, dance and for film. He holds both Bachelors and Masters Degrees in composition from the Indiana University School of Music. Mr. Schneider has received commissions to write works for Opera at Florham, Shirley Broughton Dancers, Fran Snygg Modern Dance Company and The Rockport Chamber Music Festival, where
he served as composer-in-residence during the summer of 1985. His
Concerto for Jazz Clarinet and String Orchestra, written for the noted jazz clarinetist Perry Robinson, has been heard numerous times in the United States and in Europe including the New York premiere performance by the American Composers Orchestra at Merkin Concert Hall. During Mr. Schneider’s six years as music director of the International Zelt Musik Festival in Freiburg, Germany, he was awarded the Society of Baden-Wurttemberg Cultural Prize in recognition of his distinguished work as composer, conductor and pianist. Mr. Schneider’s works are published by Berben edizione musicali, Peer Music and American Composers Editions.

Friends, Romans, Countrymen (2005) is a musical setting of Mark Anthony’s great soliloquy from Shakespeare’s Julius Caesar. My setting of the text attempts to capture the great affection that Mark Anthony felt for Caesar as well as the great contempt he felt for Caesar’s betrayer, Brutus. In setting Shakespeare’s text, I have strived to allow his words to come through as clearly as when spoken unadorned on the stage. The musical coloration I have dressed it in is clearly my own personal interpretation of Mark Anthony’s feelings for Caesar. The soliloquy is a mere seven minutes in duration, but it is packed with a broad range of drama and emotion. Opera at Florham commissioned this work in 2005 and presented the premiere performance with Jan Opalach as Mark Anthony under the direction of the company's gifted music director Thomas Carlo Bo. (New York Premiere)
Posted by American Composers Alliance at 3/14/2009